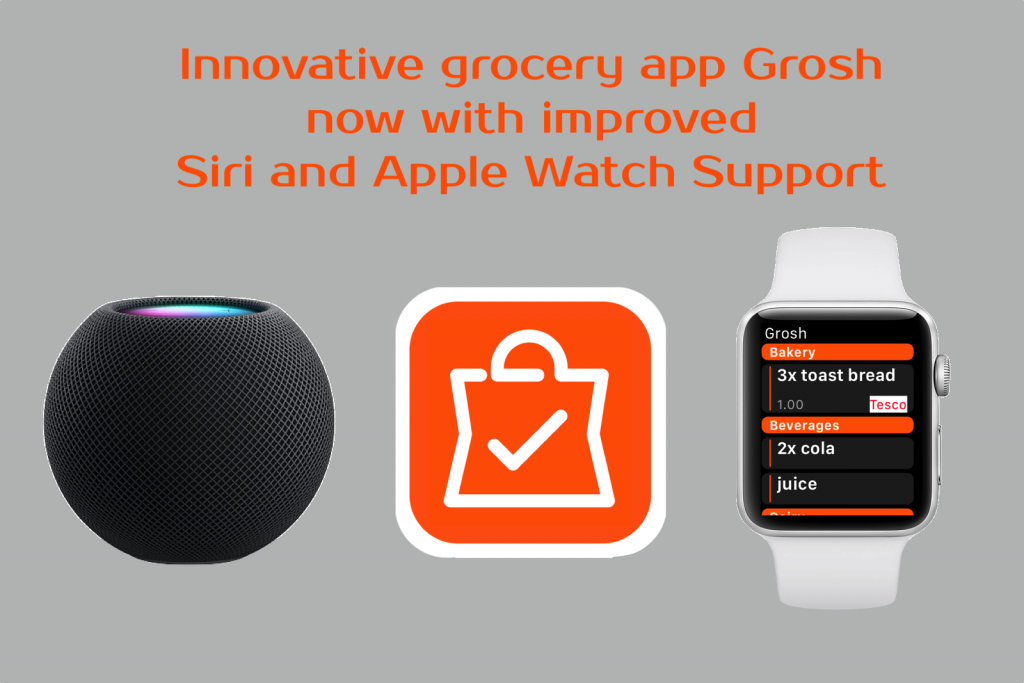 From the beginning, the Grosh grocery app has been available on iOS, Android, and as a webapp. This is very helpful for families using different types of devices. However, with almost 2/3 of the Grosh user base being on iOS, we’ve decided to give some extra attention to our iPhone users in the latest release. We are now happy to announce support for Siri and Apple Watch directly in the app. You can try this and much in latest version of the intelligent grocery app Grosh (version 4.5).

Like we previously added Alexa and Google Assistant support, we now also support Siri. For Siri we have chosen a very simplistic solution with focus on the most likely thing you want to do: add an item to your shopping list. You need to activate Siri for the app first, do so under Settings-Grosh-Siri. Then you can say:

“Hi Siri, add milk to my shopping list in Grosh” to add “milk” to the list called “shopping” in Grosh.

Or you can add multiple items using “Add milk, sugar and tomato to my grocery list in Grosh”

Stating the list name is mandatory, but we added a setting in Grosh called “Siri ignore the list name” which means Siri will ignore the spoken list name and just use your current selection in the app. This makes sure whatever you dictate end up in the current list, and you don’t have to worry about stating the correct list name.

All of this works in any language supported by Siri and Grosh.

Previously you had to install a separate app to run Grosh on Apple Watch. This is now much simpler, as the separate app has been merged into the main Grosh app. What you need to do is to enable Grosh for your watch from the Apple Watch app on the phone. Then bring up the app on both the watch and your phone. The watch says something like “Please login with premium account” – then from the force touch menu choose “Login”. And presto, you should see your shopping list within 2-3 seconds. Force press to select another list – for more tips see here.

PS If you run into any problems or have questions about Grosh, you can always send a message to support at groshapp.com
PPS Due to some of the new extensions made to Grosh, it now requires you to have iOS11 or later. If you have an iPhone 5 or iPad 4 with support only for iOS10, you can keep using Grosh 4.4.1.