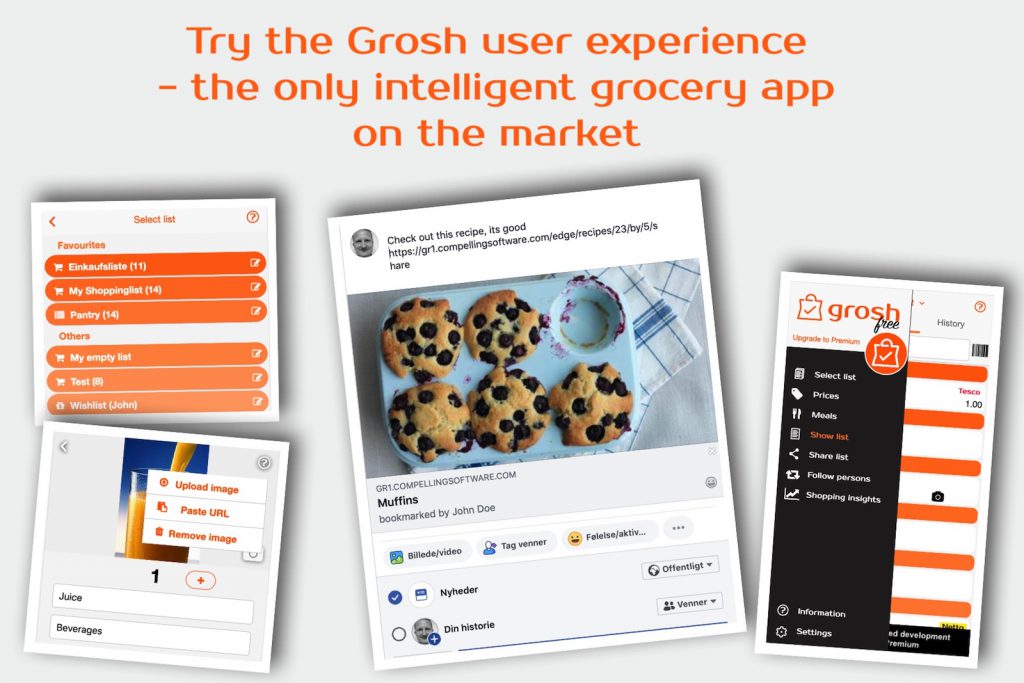 Grosh is a grocery shopping and recipe app that tries to do things differently. The latest version Grosh 3.3 is dedicated to user experience and improved performance. Read all about it here!

Our old menu had been with us since the initial launch of Grosh. We’ve improved its appearance and it now also indicates where in the app, you’re currently located.

Try before you buy

We’ve also added a fully functional shopping list that’s available without signup for an account. This lets you try out the core functions before you sign up.

If you paste a share link for a recipe into your favourite social media, you will see that Grosh now renders the recipe nicely with title, image etc. on the social media. What’s more your followers can now tap the recipe and open it up in the noaccount-version of Grosh (see above) to check out your recipe without having an account 🙂
The same goes if you share your personal profile too (from Settings-Followers).

On all screen you can now tap the camera button and do more with images. From a web browser you can now upload images (previously, you could only take photos from the phone or upload from your phone camera roll). As something new, you can also paste the URL of an image you found on the internet. This feature is also available in the free version of Grosh.

We know that performance is problematic on some Android phones. Grosh is slower on some new Android phones than on a 7 year old iPhone 5 which runs Grosh without any hiccups. We’re working to eliminate factors that can cause the problems, but as this is just affecting some Android devices it is complicated and will take some time. But version 3.3 has been measured to be at least twice as fast on some of the problematic phones.

You might have seen that our curator users have been busy – they are finding good recipes in the app made by other Grosh users. We’ve extended the number of curator users to also cover Norwegian, Hungarian and Dutch.

The app is for the first time fully translated in Norwegian, and Dutch is on its way 🙂

If you own an Amazon Alexa or Google Assistant enabled device, we’re working to finalize voice dictation to manage your shopping list check – see https://groshapp.com/grocery-app-dictation/
We’re supporting multiple languages for both Alexa and Assistant. If you want to join our beta test, just write to us at beta at groshapp.com and specify which platform you have.

We hope you enjoy this update of Grosh. We get lots of suggestions from our loyal Grosh users – indeed most of the changes in version 3.3 come from our users. Keep your feedback coming by sending a message to feedback at groshapp.com 🙂