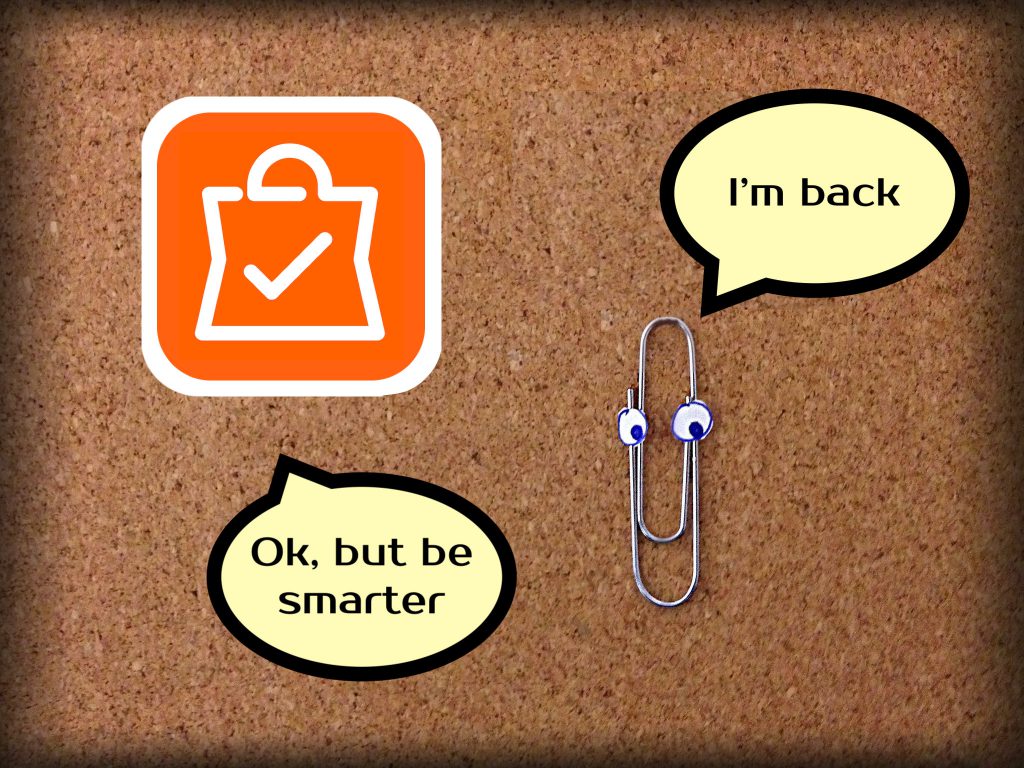 Some of us with a few years under the belt remember the animated clip “Clippy” that offered help in Office 97. He’s back, but in a smarter way in Grosh 4.8 that launches today. The built-in hints help new users better on the way in Grosh, the intelligent shopping app. In addition, there’s various other improvements and fixes.

Remember Clippy? Yes, we know it wasn’t great because he did not actually adapt nor take the users’ past behaviour into behaviour. If you don’t remember Clippy, check out this excellent Youtube video on Clippy!

With “hints” introduced in Grosh 4.8, we’re providing hints based on a quick profile of your past usage of Grosh, and as you learn and use more of Grosh, the hints are adapted.

Over time we’ve seen that it takes a while for our users to take advantage of the full potential of the app. Some even never realise that there’s more to Grosh than initially meets the eye. We’re now taking advantage of the footer space to show hints based on the features the user has not yet discovered. Tapping the hint jumps to either an intro guide that explains what the user has not yet tested or the specific page where you can invoke the feature.

If you’re an experienced Grosh user there’s a good chance that you have tried most of the corners of Grosh. In case you wonder if you have covered the areas we’re initially promoting, take a look under Information -> Messages and look for messages dated “today” and try to tap them 🙂

Note, if you support Grosh with our premium subscription, you always get the full screen space without any advertisements, hints etc in the footer area of the app. If you would like to see the hints, just visit Information -> Messages.

To increase efficiency, we’ve started adding a few bulk operations in the app. First out are

We’re hoping our users will interact more with each other using our Follow mechanism. You can now see the number of users following you under Settings – Followers. This would normally be friends and family that like to see the recipes you publish in Grosh.
We hope our users will also use the integration between Grosh and social media platforms a bit more, e.g. to share recipe links on their favourite social media.
Initially, our hints and new guides focus on helping the Grosh users get started on all of this. Other areas coming in later releases.

Less intrusive “Sorting” message when you’re at location with many shoppings. Sorting also happens much faster as the app stores the last sorting known for this location.
This also means you now get sorting at locations without network connection. Locations / store also gets properly assigned when opening the app later to sync.

PS If you run into any problems or have questions about Grosh, you can always send a message to support at groshapp.com